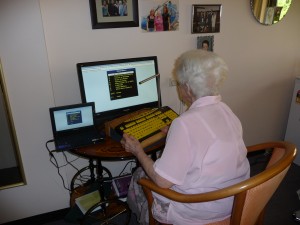 Nana McLeod (Kathleen) was born in Mercer in New Zealand in 1926. The second youngest of eight children, only her and her youngest brother were actually born in New Zealand – one brother was born aboard the ship from England when the family emigrated in 1921, and all of the other siblings were born on English soil.

Kathleen lived on the farm in Mercer until the age of nine, when two maiden aunts, (Emily and Angie) visited and took her back to live with them in England, fearing that rural New Zealand was no place to bring up a young woman! She lived with them in Prestatyn, North Wales for one year, attending a strict Catholic school. When the threat of war raised its ugly head, it forced the two maiden aunts to return young Kathleen back to her family in New Zealand.

Kathleen had a variety of jobs including embroidery machinest, shop assistant, domestic work, and four years in a convent as a teacher, followed by being a preist’s housekeeper.

In 1955, Kathleen married Frank McLeod and they had seven children – Raewin, Marion and Barbara (twins), Susan, Anne, Brian and Linda. They lived in Palmerston North where the first four children were born. Frank worked at a seed and grain merchant’s. They eventually moved to Hastings where Frank worked for Ford Motors until he retired in 1988.

Frank and Kathleen experienced their first overseas travel on a Holy Land Tour. Frank wasn’t keen to repeat the experience but Kathleen travelled again over the years and after Frank passed away in 1994, moved to Brisbane, Australia for the warmer climate, proximity to family and greater support for senior citizens that Australia provides.

Declared legally blind a number of years ago, Kath hasn’t let that stop her from experiencing life as fully as she can. From visitng her youngest daughter in England and looking up some long lost relatives in the Chorley, Rochdale and Bury regions, to flying back across the pacific to visit old friends in Hawke’s Bay, or popping down to family in Melbourne, lack of sight has not held her back from doing what she sets her mind to.

Six months ago, she decided it was time to learn ‘this computer thing’. With assistance from her daughter Sue, son-in-law Jon and his business, Pacific Vision Australia, they got her the equipment she needed, provided the specialist software and the caring support to teach this 85 year old what a computer is, how to operate it, how to connect to the internet, and how to communicate via emails! Although a frustrating process at times, Kath is now reading and writing emails to her children and grandchildren on a regular basis. When her great grandchildren come online in a few years, she will be there ready and waiting!

This site is a dedication to an extremely strong, determined, fun-loving, caring mother, grandmother and great grandmother who has started to record her memoirs using the excellent and effective software for vision impaired provided by Pactific Vision Australia. I’m proud to call her my Mum and i know my five older sisters and brother are too. I think, if you spend the time getting to know her, you will be proud too. Enjoy!