Most of these memories are from between the ages of 3 and 9 years.
At a very early age I learnt to ride a horse by being hoisted up on its back and told to hang on to its mane. The horse was given a smack on the rump to start it moving, and it would follow the other horses wherever they went. Simon was one such horse that none of the older boys liked riding, as he was a big old bag of bones. So when they were sent out to bring the horses in for work I was often taken along as spare jockey. Simon followed blindly wherever the others led, as long as someone was on his back. We took ditches and broken fences in our stride.

We also had a Shetland pony named Dandy, who had a will of his own. He would not be shod, or be saddled or bridled like other horses, but would allow a rope bridle to be looped round his head. He was very cunning and would allow any member of the family – adult or child, to ride him, but if a stranger sat on his back he would very quickly find himself sitting on the ground. The boys would tempt visitors to try riding him by putting me on him to show how quiet and gentle he was. But it always ended up the same way – with them sitting on the ground and Dandy standing placidly by seeming to enjoy the fun.

Dandy was a rogue in other ways too. He learned how to open gates, but not to shut them, and so mix cattle or sheep. One time when the family had moved from one farm to another Dandy took a dislike to the new place, and set about opening gates and leading all the horses back to the old farm. 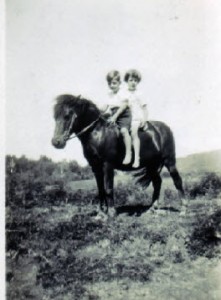