Our farm was a mixture of animals and crops; we had horses and bullocks to do the heavy work like pulling a sledge or plough. There were also sheep, cows, pigs, goats and hens with their various offspring in season.

Chickens were not much trouble as long as they had food to scratch for. The mother hens took good care of them. Lambs were sometimes rejected by their mothers and had to be bottle fed. It was fun feeding them, they would suck furiously on the bottle with their tails wagging like flags in the wind. Every now and then if the milk was not coming quick enough they would bunt at the bottle to try and get it faster.

We had to be careful not to make pets of them as they had to go back to the flock when they could feed themselves. Sometimes a mother could be coaxed to adopt an abandoned lamb if the skin of her own dead lamb was put on the back of the orphan. The ewes recognise their lambs by their smell and will reject all others.

Calves also had to be taught to drink when they were separated from their mothers. We had to dip a hand into a bucket of milk and let the calf suck our fingers and slowly lead it to the bucket and into the milk. Sometimes the calf would stop sucking before we got its head down to the milk and we had to start over and hold its head down. They soon got the message and before long they would be lining up for their turn.

Pigs were not a problem as the mothers took care of their piglets. There was one young piglet who was not satisfied with his mothers supply of milk and would wander off to find an accommodating cow. He would sit under her udder and drink to his hearts content.

I do not remember if we had any baby goats but if we did they took care of themselves. 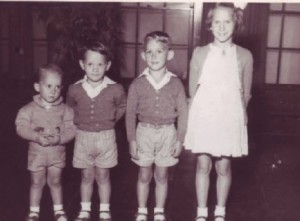